I rediscovered the pleasure of playing tennis 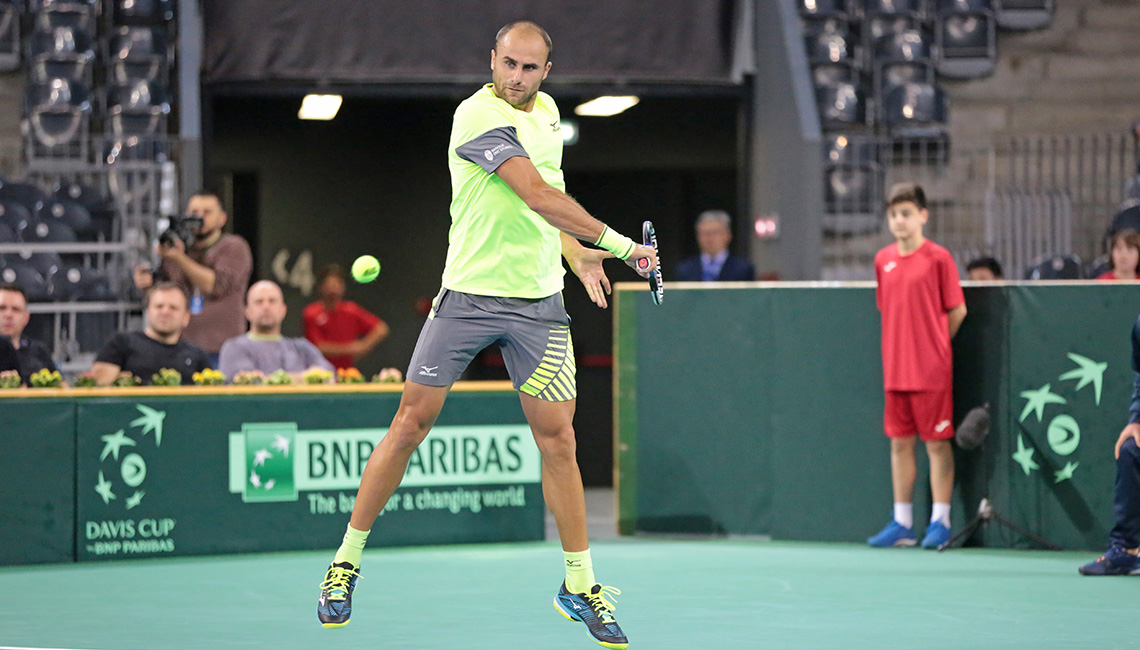 One of these days I was interviewed by the journalist Ovidiu Blag, to whom I answered a series of questions about my work and also about the objectives I have for the 2018 tennis season. I hope this interview will answer all your questions because my thoughts where with you, with all the people who support me.

Ovidiu: You’ve managed to keep your position in top 100 ATP lately. How did you do that?

Marius Copil: I can say I went on this beautiful path with the help of my coach, Andrei Mlendea. I still remember how we began, two years ago, in Sofia and I was actually thinking a few weeks ago when I had the Sofia Open final that this place means a lot for my career. I also wanted to highlight this at the award ceremony, when I thanked my tennis coach in front of nearly 12.000 spectators and, certainly, many other viewers.

And when it comes to the reasons of this success, I am sure that it is due to the changes we have decided to make in my game. I play much more aggressively now, which was not easy to change, because it was something I’ve been doing subconsciously, I was defending myself. It’s what I did for 19 years. But with a strong desire and determination, we were able to change the pattern and I became more aggressive, more offensive to the net. I also improved my volley so now I can say I have really made a change.

Ovidiu: Did the mental approach also play a role in this performance?

Marius Copil: It surely did. I took the risk of changing my game. Me and my coach realized that only such a new approach can put pressure on the strong opponents, the ones who know that patience and small details can make a difference in their favour. This is exactly what we trained for, the strong game that can change the difference in my favour. The two matches that I had against Luxembourg helped me a lot. Then, the final at Sofia Open came and till there I managed to win in front of strong players like Robin Haase and Gilles Muller, which I didn’t only defeat, but I also dominated during the matches.

I learnt to accept mistakes, to have faith and now I can say I have rediscovered the pleasure of playing tennis. Now I play with love. Of course it took a lot of mental work and here I have to mention Ioan Popoviciu. He had a major role in this change. I always had a losing problem, I could not accept the fact that I can lose a match. Not because of ranking points or money, but because I didn’t know how to manage such moments. But now I think different: I can learn from mistakes.
And I also learnt something else: to think about achievements, not only for the personal good, but also as a way of bringing joy to the people who follow and support me. For example, in Sofia, when I saw that Romania’s flag rose in front of 12.000 people, I had a feeling I may not have realized so far. That I was not only fighting for myself but also for those who sympathize me and care about me.

Ovidiu: What do you think that makes the difference between the professional tennis players who are in top 100 ATP and the other players?

Marius Copil: They have courage, they take risks and make the most out of their strengths. Top 100 players also know very well their neutral points. So they guide their game around the strong points, they don’t make “gifts”, so if you want to win you have to be brave.

Ovidiu: Lots of people have been sceptical about your evolution on court. What did that mean to you?

Marius Copil: That is true. I felt this and it might have been the reason for my social absence for a very long time. Then, slowly, I also improved my communication skills. And I did this the best with Andrei Mlendea and another good friend of mine, Cosmin Hodor. He used to tell me what I was doing wrong on court, but until recently I did not accept other opinions. But in time I’ve learnt how to do this too. I used to be an up-front guy, I was telling things as they were. I still do it, I support my ideas, but at the same time I take into account advice that comes from safe sources.

Ovidiu: You have recently launched a website and I noticed that you have an interesting logo. M and C, your name’s initials, but it seems to be more than that…

Marius Copil: Yes. The M is like a cardiogram. Same as my life, with ups and downs from the most intense experiences. The C is like half of a tennis ball, the object that completes my life, next to the tennis racket. And, of course, MC comes from Marius Copil. Me, Andrei Dragus and his friend have put a lot of thinking on this website and we are glad that people like it. It adds up the important moments of my life.
It gives me an amazing feeling to talk to my fans through it and show them my respect for all the support. And I want them to know that their thoughts are always with me at every match I play, so they mean a lot to me. In addition, I like to share my experiences for the juniors because it might be useful for them. I feel very close to the young players and I like to think that they have a lot to learn from me. We strongly need juniors to come forward, to show their talent and I really wish to offer them useful information.

Ovidiu: How do you see your progress on the tennis court from now on?

Marius Copil: I take things as they are: if I improve my game, the results come, if there are results, I get ranking points and money. I do not think backwards, money and points first. Now I am trying to find a way to reach a further stage at a Grand Slam tournament, because that is where you need to have that extra something that not all the players have. The tournament lasts 2 weeks, you need more energy, the matches are longer because you play 3 sets out of 5.
But I can say that my life looks better now because I have found my game. What’s strange is that this aggressive game brings me inner silence, one that I haven’t had before. I live into the present, I know that tennis is what I do for a living, I know that I am a man like any other, but at the same time I am lucky that I have the chance to do what I like. And I do it well.

Ovidiu: How do you spend your time when you are not on the tennis court?

Marius Copil: First of all, I like to learn things from those who know how to do them. People who have gained life experience and I have something to learn from. Weather we talk about sports or other fields. I feel attracted to everything that’s new, I read and study about constructions, interior design, photography and, of course, sports.
I like to discover cities and there are some that I really love. For example, Munich because I lived there for 7-8 years. Another city that I’ve been feeling very close to lately is Cluj-Napoca. It seems to me like a city full of life, with lots of great events. A living city. But I think what I like the most about Cluj is that it seems to be a city that wants to progress, to go further and further, just like me.

Ovidiu: You mentioned your friends earlier. Can you give us a few names?

Marius Copil: Of course. For example, Cosmin Hodor, whom I met in 2005 at a Davis Cup match where I was participating in the wider lot, in Japan. So we have known each other for a long time but I can say that our friendship has grown year by year. Sebi Kraila is another important name for me (he is now resident in London, former tennis player) or Ion Ion Tiriac from whom I learned a lot. Or Florin Iorgoni whom I met at Indian Wells in 2017 but with whom I speak very often. I also have to mention Ronald Gavril, a well-known boxer whom I met through Ion Ion Tiriac.
I am very attached to all these people but many others also. I could give you a huge list J

Ovidiu: Your parents have an important place, both in your personal life and your life on the court. How do you see this now?

Marius Copil: They both have done lots of great things for me and still do. My mother was there for me every day in Germany and USA when I was trying hard to become a great tennis player. My father had a major role in my support and I am more than grateful to them. Now I am sure that more important than my financial goals or the ranking points, there is something else that I did for them: I made them proud of me. And this makes me pound of myself.