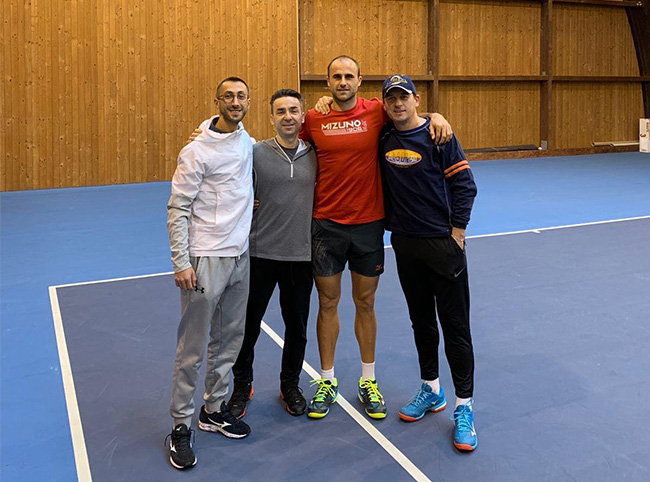 During 2018 I had plenty of beautiful moments that I really apperciate when I think back. In the thank-you letter I mentioned just a few of the people who took part to my success. After the Sofia Open final I have been looking to go beyond my condition. With a lot of ambition, with my head up and intense training, I managed to end the year with a memorable match against Roger Federer, in the ATP 500 Basel Tournament. And this happened after winning six consecutive matches, two of them extremely important, against Marin Čilić in quarters and against Alexander Zverev in the semifinals.

I felt the taste of victory and that made me push the limit, hoping to win an ATP title and get as far as possible at Australian Open. And why not, to be among the first 30 tennis players in the ATP ranking.

The most important year in my career is about to start next to the team I have performed best with. The evolution is visible from all points of view, physically, tactically and mentally.

I will celebrate the New Year in Doha, but I will most likely be thinking at the first match in Qatar ExxonMobile Open Tournament, which is being held in the first week of 2019.

My current ranking, #60 ATP, ensures my presence on Qatar’s main draw, but I am still waiting the confirmation for the second tournament of the year, in Auckland.

The third week is the week of the first Grand Slam, Australian Open. Although I have been disappointed with my game from the first round in 2018, looking back I realize how much the loss in front of Gilles Simon meant to me. The fact that I don’t have to play qualifiers at the ATP250 or at Grand Slam tournaments, gives me a longer recovery period that helps me focus more on physical and mental training. Regardless of the luck I will have in the draw, I will play every ball like it was the last.

In the first week of February I have to defend the Sofia Open final. I will return there with love, especially for the amazing crowd who supported me until the last ball in 2018.

There is one more thing to mention. I always read your support messages with joy and they have all contributed to my success and to the confidence I have gained so far. I want to thank you and wish you and your loved ones Happy Holidays and a happy New Year.